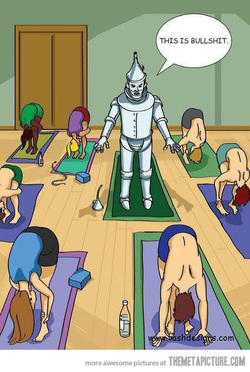 I’m celebrating my ten-year anniversary in the yoga community! Really. I am. Ok, it’s actually closer to 12 years. I’m not trying to trick you. The truth is that I stopped counting at ten because … well, because … I still can’t touch my toes. Ok, there, I said it. If I get a really wide stance, and use a block, I can get down in that general region. But my fingers never actually make contact with my toes.

I also can’t do a handstand – or a headstand. Well, ok, technically I’ve done both with major assistance from teachers who had no idea what they were getting into when they offered the help. I can’t do fish as it brings on a serious wave of nausea. And I can’t do binds as my body just won’t become a pretzel no matter how hard I concentrate.

This isn’t to say I don’t try these poses – while I grit my teeth, of course. I tried crow several times and just when I thought I had it, I fell on my head and a migraine followed. I tried wheel one time with assistance from a teacher about half my size and I almost fell on her, but she moved out of the way just before I crashed on the mat. I continue trying that spread-leg-bend-to-each-side-while-reaching-for your-toes (Does it even have a name?) thing, but no one actually realizes that I’m trying, as the gap between my hands and my feet is wide enough to fit my Smart Car.

I don’t tell you these things so you’ll feel bad for me. I just want you to understand what kind of yoga practitioner I am … an insane one. We all know that the definition of insanity is doing the same thing over and over again and expecting different results. That was my first ten years of yoga … trying, and trying and then trying some more — without getting any closer to the floor. The woman who owned the first yoga studio I went to – over and over – in Philadelphia asked, “Don’t you want to get better?” Of course I did. Didn’t I?

When I moved to Denver seven years ago and was surrounded by “-thoners,” (you know who you are – marathoners, hike-a-thoners, bike-a-thoners, etc.) I was hellbent on upping my yoga game. After all, I had to fit in. If the 65-year-old dude with the ultra-marathon t-shirt can balance on one hand while reading a novel then I could certainly produce a traditional handstand.

And then I went to a studio with mirrors.

Crap. That just couldn’t be me … the one who looks like a baked potato covered in a wad of butter. But in fact it was. So I bought myself some fancy yoga outfits because if you can’t do the yoga-thon then you should at least look like you can. But that made me feel like I was playing dress up and who wants to be all dressed up with no place to go … but a beginner yoga class?

The other thing that I had working against me was my attitude. I could totally get away with sarcastic comments during my South Philly yoga classes. But in Colorado everyone is too busy smiling while getting in touch with their inner Buddha to embrace my … authentic … yes, authentic, viewpoints about their sacred activity. I wouldn’t even mention the word yoga to anyone I knew that was in any way affiliated with anything in Boulder. That would have been suicide – at least to my ego.

And then one day I stopped giving a shit. Maybe it’s because I turned 40. Maybe it’s because I had bigger problems than trying to touch my toes. Or, just maybe, I (finally) decided to find my own practice. And I did. Sometimes my practice is restorative. Usually it’s gentle. But it never involves touching my toes.

During all this nonsense, I forgot to actually celebrate my ten-year anniversary. I’m always up for giving myself a little gift, so I googled 10th anniversaries to see what I should present to myself. I discovered that tin is the traditional ten-year anniversary gift because a successful marriage needs to be flexible and durable, plus able to bend without breaking. You don’t need to do inversions. You don’t have to be a “-thoner.” And you sure as hell don’t have to touch your toes.

Amy Angelilli continues her committed relationship with her practice at Whole Yoga. She remains determined to bend without breaking – her nails. For more information about Amy, her workshop, and her adventures, visit www.adventure-project.com.