Today we launch a series profiling Whole Yoga practitioners. Let their stories reignite and inspire your own practice. 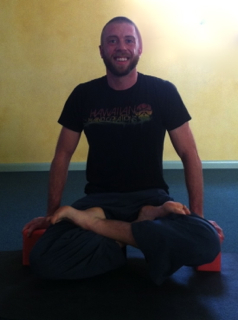 You might call Jesse Cooper a walking, disc-throwing, snowboarding participant in the power and grace of Boot Camp where he found a daily yoga practice.

By candlelight that yielded to dawn at Whole Yoga, Jesse and about 15 other Boot Camp participants were guided in postures and meditation for one hour on ten weekdays that started in late January at Whole Yoga.

Jesse, age 31, had previously undertaken a smattering of yoga. One week after Boot Camp ended, he eased into first-ever postures: Lotus (Padmasana) and Tolasana (Scales)!

Some highlights of his yogic path starting on Day One of Boot Camp:

Monday: Nicole guided participants in asana and meditation, including mantra. “’Mind protector’ was the way she explained mantra,” Jesse recalled. Om Namah Shivaya worked its way into his life.

Tuesday: Erin’s class introduced him to the music and chanting of Krishna Das. Since then, Jesse’s playlist pivots around soulful songs like Heart As Wide as the World: Sri Ram Jai Ram.

Dawn after dawn, into the final Day Ten: Jesse no longer felt duty-bound to hold his breath until the teacher cued an exhale. Instead, he began to heed the rhythm of his own breathing.

Wednesday night in Yoga Basics, Jesse responded to instruction on placement of the feet and activation of the muscles holding up the arches. Years of sports and five-to-ten-mile frequent walks have taxed his ankle ligaments. Now yoga is melting those after-effects.

Thursday morning, intending to go to Satya’s yoga-meditation class, “I barely made it. It was a real struggle to sign up and get out the door. Part of me tried really hard to list all the reasons I should go back to bed. I finally decided just to have faith that going was the best decision. I am so glad that I did.”

Friday, Jesse raced to Sue’s noon class. Afterwards, she snapped a photo of Jesse in lotus pose: “Today was the first-ever time I have been able to do Lotus,” he texted, “and also the first time I was able to do Tolasana with it. Great class today.”

Four years ago Jesse returned to college to “start over, having not done well right out of high school.” He is readying for a 12-week internship, capstone of a program leading to a Bachelor of Science in Integrative Therapeutic Practices and a minor in Nutrition at Metropolitan State University of Denver.

That life purpose animates Jesse’s yoga practice as well as other pursuits such as competitive disc golf. He skillfully throws a disc some 400 to 500 feet. Linking golf to yoga and spirituality, he identifies with Deepak Chopra’s Golf for Enlightenment: The Seven Lessons for the Game of Life. In Jesse’s experience, golf and yoga are kindred practices of pranayama and mindfulness, and they both offer metaphors for health and healing.

PS: Jesse’s newfound unswerving yoga practice embodies the vision of Sri Shambhavanada. The founder of Shoshoni Yoga Retreat and Shambhava Yoga describes yoga and meditation as expansive, because it is “the direct experience and insight into one’s true inner nature, available to anyone who is ready to surrender the distractions of the mind and open their heart.”

Note: Carol Sullivan, now in her twelfth year of teaching at Whole Yoga, interviewed Jesse and wrote this profile. Please e-mail your suggestions for other profiles to satyama108@gmail.com.